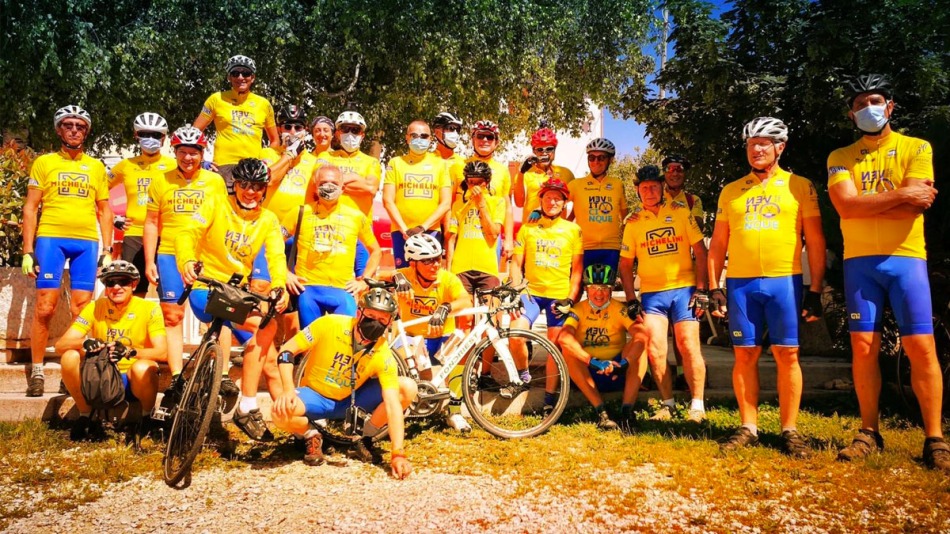 The narrative of this trip has begun a month ago, when  I was cycling around Bologna, looking for a water fountain, I stopped in Sasso Marconi where I found a crowded gathering of cyclists around one of those modern waste stations. Do you know what I mean with  “station”?  A cubicle in the shape of a house,  where you need to have some change to get some water out of it, just because the Municipality has decided that they want to offer you cold and sparkling water instead of free drinkable water as it should be?  I don’t want to argue about it, not now, however, thanks to this large group of cyclists who had some coins I’ve got my precious refreshing nectar.  It has been at that moment that the man who offered to me some water invited me to go back to Bologna with the group since they were also cycling in that direction. I switched off my Garmin and I said: “why not, sure I’ll follow you”. It has been a very unexpected afternoon, I was surprised by the way they described themselves “Gruppo Enogastrocicloculturale” which is “oenological, gastronomic, cultural and cycling group”. I’m not really a person who loves to be part of a large party, but the idea of a group that was able to live the passion of cycling with this kind of mix of interests was convincing enough for me to say “why not?”. So after a couple of evening when I’ve joined the group for a drink and a short afternoon when I joined them for half of the ride, I was convinced to be part of the group for the annual summer holiday:  Lissinia (Valplicella) 2020.

All planned (by Ciclozenith), I joined the group on Thursday early morning, a huge touristic bus with a bicycle trolley was there waiting for us. Time to load the bus and we were ready to go. It took to us two hours and one coffee to reach Breonio on top of a very panoramic street (that we rode another day). A van was going to follow us with all supply and bags,  so we didn’t have to worry about anything. A short downhill brought us to the first visit, a waterfalls’ park called “Parco delle Cascate di Molina ”,  due to the action of the stream, we could admire characteristic shapes such as furrows, niches, and erosion, but also the waterfalls at different levels of a trekking route that took us to the heart of the Fumane valley. At the end of the visit, we had lunch served by the 2 angels of the rescue van,  and then we were ready to go down hit the bottom of the valley to climb towards Bosco Chiesanuova, which would have been our destination for 3 nights. Before to arrive at Hotel La Piccola Mantova we have stopped for the evening “Spritz Spritz Spritz Spritz”, a tradition for the group. Enjoy yourself at the arrival with a glass in your hands, what would you want more?

The longest day of the trip with 2 wine-tasting and a good elevation to climb. We knew that we could have faced some rain during the day, anyway, we had a great morning, sunny and warm. Cycling thought Erbezzo and then down along the street that our bus climbed the day before. We had time to admire the landscape all around. We arrived at Villa Torre Allegrini, for the first stop of the day around 12. The visit was interesting, not only for the renowned wine of the estate but also for the architecture designed by Giulio Romano a  pearl of the renaissance.  Who defined the tour named “Cartografo”  had to revise a couple of time our route to regain some delay of the group, we followed and honestly we couldn’t complain, small roads without traffic and vineyards as far as the eye can see. Second stop was at a regional grocery store, who wanted, had the opportunity to taste cold cuts, cheeses and wine. I ate my usual a protein bar and bananas, to make sure to stay light, scarred by the afternoon climb! Around 4 pm after a coffee, we were back on our bicycle ready to go back to Bosco Chiesanova, dark clouds all around, the group got separated, with few others in the front we had decided to keep going whilst others stopped to visit another ancient bridge. I should say that we had been lucky, we had to wear our rain gear but the storm was far and we reached the destination safe and sound. As usual, we celebrated with a drink just before a warm shower and a late dinner. It has been a beautiful long day.

The more difficult stage of the tour (at least for me!). 22 km off-road fighting with gravel and rocks. The day started from a short visit to the valley of the sphinxes a valley with monolithic blocks reminiscent of the Egyptian sphinxes, created by the atmospheric erosion. From there the climb wasn’t easy but still on asphalt we arrived at the refreshment point where our van was waiting with cakes and drinks. From there we left the road for a track into the natural park of Lessina. Climbing this type of tracks was very new to me. I most cycled on roads or easy natural paths with solid ground, cycling on the scree it was difficult but Ciclozenith doesn’t leave anyone behind, so with some suggestions and slowly following someone in front of me, gave me the guts to reach our destination. Lunar lands and grazing cows have surrounded our paths around Tomba Mountain up to the altitude of 1700 meters. We stopped at the Malga Podesteria for lunch and then was time to go down, again slowly I followed the group and we were back on asphalt after some times. The street from there was astonishing, Fittanze Pass was crowded with motorbikes, but we were enjoying our day and we didn’t really care about it.  When the group was reunited we split in two, one group went back to the hotel following the main road, whilst someone decided for another rough path. I went back on the road and I closed my day along a fast and very nice downhill.

Last but not least for its itinerary. We went back to Fittanze Pass arriving from a different road climbing it on an amiable slope.  The real challenge of the day was the downhill towards Avio, for more than 10km between 13 and 20%. We were all afraid that your brakes would burn, some did and our van had to go back and get them. An amazing street, hairpin after hairpin, took us to the valley of Adige in an hour, in time for our visit at Avio or better Sabbionara Castel. At the slopes of Monte Vignola, with a very long history from a Roman camp in 1977 Emanuela Castelbarco, nephew of Arturo Toscanini, donated the Castle of Avio to FAI and the foundation immediately began to intervene with restoration works.  From there our tour proceeded along the Adige cycle path, a panoramic cycle path with a bit of ups and downs that in 30 relaxing kilometres took us where our bus was waiting to drive us back home after the last drink of course! 😜

2 comments on “Lessinia with Ciclozenith”